With the improvement of the intelligent requirements of the vehicle assisted driving system and the network development of the automotive electronic system, the new parking sensor should be able to continuously measure distance and display the obstacle distance, and have a communication function to send data to the bus. .

In the past, the reversing radar design used more components and functions. The reversing radar based on the new high-performance ultra-low-power single-chip MSP430F2274 described in this paper can make up for the shortcomings of the previous products.

TI's 16-bit microcontroller MSP430F2274 has extremely low power consumption and abundant on-chip resources. At the same time, JTAG interface technology can be used to easily program on-chip flash memory and facilitate software upgrade. It is very suitable as a microcontroller for reversing radar system. The block diagram of the parking sensor system is shown in Figure 1. 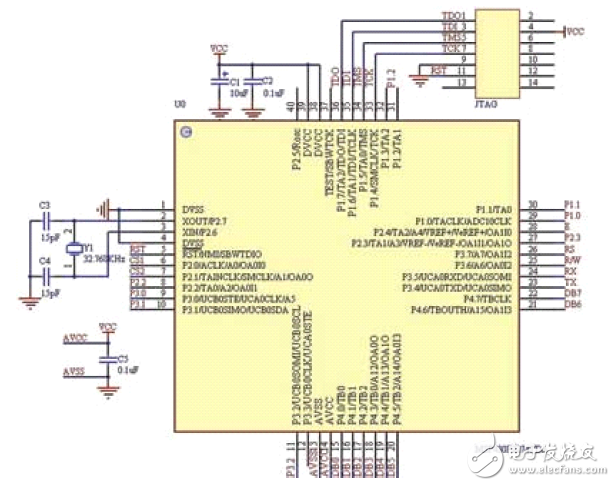 The main control circuit diagram of the system is shown in Figure 2. The MSP430F2274 selected in this system has 32Kb flash memory and 1KbRAM, so there is no need to expand the memory. The external 32.768kHz crystal is used as the clock source for the CPU-off state Basic-TImer and is also used as the system's on-board clock.

The ultrasonic transmission module circuit is shown in Figure 3. It consists of two parts: ultrasonic generation and emission. There are two ways to generate ultrasonic waves: hardware generation and software generation. The commonly used hardware generation method often adopts the following scheme: the ultrasonic wave is generated by the oscillation of the oscillator composed of CD4011, and the ultrasonic transducer is driven to be emitted by the boosting conversion, and the start-up and the stop vibration of the oscillator are controlled by the single-chip microcomputer. This design adopts the software generation method, because the software generation method can reduce the complexity of the hardware, reduce the cost of the system, and has the advantages of flexibility, easy implementation, and good stability. The system uses the timer function of the MSP430F2274 microcontroller to generate a stable PWM (40Hz) pulse wave, and outputs it to the ultrasonic transmitting part through the I/O port P2.3. In the ultrasonic transmitting circuit, the CD4049 includes a total of six non-gates. In Figure 3, only three lines are used. In order to prevent interference or electrostatic breakdown, the entire CD4049 is damaged, and the three non-gate strings on the unused side are used. Get up and do the grounding. When the control terminal outputs a series of fixed frequency pulses, the positive frequency and the reverse voltage of the fixed frequency are applied to the piezoelectric ceramic ultrasonic transducer UCM-40-T, and a high-power ultrasonic wave is emitted, and the obtained waveform is better than the other. The effect is more ideal. 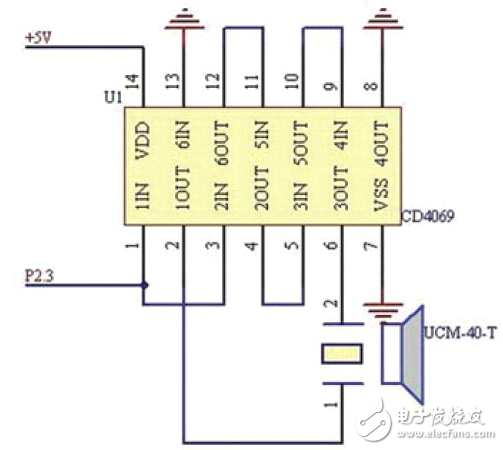